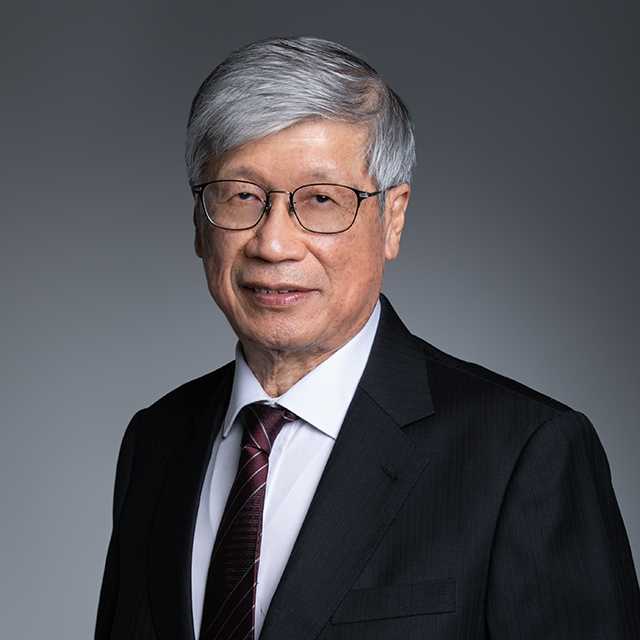 Denis Chang, Senior Counsel, is a graduate of the University of Bristol, England, where he obtained his LL.B (Hons) in 1967 and from which he holds a Doctor of Laws degree, honoris causa. He is a member of Lincoln’s Inn and was called to the Bar of England and Wales in 1968 and admitted to the Hong Kong Bar in 1970. He has been in private practice continuously since then.

Appointed Queen’s Counsel at a relatively young age in 1981, he was Chairman of the Hong Kong Bar Association from 1985 to 1987 and an Executive Committee Member of the Basic Law Consultative Committee.

Whilst continuing with active practice at the private Bar, Denis Chang sat on the Executive Council of the Hong Kong Government during Governor Christopher Patten’s tenure and also served as Chairman of the predecessor to the Independent Police Complaints Council (IPCC).  He was appointed to sit on the Securities & Futures Commission as a Non-Executive Member and on the Board of Review of the Inland Revenue as Deputy Chairman. He was awarded a CBE in 1997.

Denis’s practice has been almost exclusively civil. Whilst starting out as a generalist, he soon found himself over the years increasingly drawn into different specialist areas of practice including property and tax, constitutional and human rights litigation, Chinese customary law and more recently probate and administration. He has advised on and represented clients in numerous landmark cases.

In the area of property law, Denis has been described as “a doyen of Hong Kong property lawyers” by His Honour Judge Cruden, former President of the Land Tribunal in the Foreword to the Third Edition of his book Land Compensation and Valuation Law in Hong Kong.

The leading authority of Jumbo King Ltd v Faithful Properties (1999) 2 HKCFAR 279 on interpretation of contracts and Deeds of Mutual Covenants decided by the Hong Kong Court of Final Appeal (“CFA”) is just one of the many authoritative and widely-cited cases in which Denis was involved as Counsel.

Another example, concerning restrictive covenants, is the important case of Sky Heart Ltd v Lee Hysan Co Ltd (1997-98) 1 HKCFAR 279 in which the CFA  not only construed s.41 of the Conveyancing and Property Ordinance Cap. 219 but also clarified the principles regarding non-interference with concurrent findings of fact.

Supreme Honour Development Ltd v Lamaya Ltd  [1991] 1 HKC 198 is a case in which the Court of Appeal, to the surprise of many conveyancers, held against the enforcement of naming rights of buildings vis-a-vis third party assignees.

Good Faith Properties Ltd v Cibean Development Co Ltd [2014] 5 HKLRD 534 is a landmark decision concerning costs in compulsory sales for redevelopment cases, the Court of Appeal reversing the long-established but erroneous practice of the District Court in generally awarding costs in favour of the “successful” majority owner(s) against the minority owner(s).

In the area of constitutional law and human rights, Denis acted for the right-of-abode claimants in Ng Ka Ling v Director of Immigration (1999) 2 HKCFAR 4.  This was the first case involving the interpretation of the Basic Law by the Court of Final Appeal, and a momentous decision which led to the first Interpretation of the Basic Law by the Standing Committee of the National People’s Congress and to subsequent cases interpreting and/or applying the Interpretation affecting thousands of claimants joined as parties and multitudes of others not joined.

Denis throughout his career is often relied upon for the most complex of “Probate & Administration” cases. This has recently been acknowledged by Doyles’ Guide in their recent “Leading Estates and Probate Litigation Barristers” for 2020 in Hong Kong, where Denis is highlighted as a “recommended Senior Counsel” within this field. Denis acted as Leading Counsel for the charitable foundation in what the media called “the battle of the century”, namely the case of Chinachem Charitable Foundation Ltd v  Chan Chun Chuen & Another (2011) 14 HKCFAR 798, where a will alleged by the defendant Chan Chun Chuen to be that of Nina Kung was held to be a forgery. The case has since become part of Hong Kong’s popular legal folklore.

In the more technical area of tax law, Denis has acted for individual taxpayers as well as corporations in such leading cases as:-

Commissioner of Inland Revenue v Church Body of the Hong Kong Sheng Kung Hui & Another (2016) 19 HKCFAR 54  in which the CFA clarified the law relevant to issues of trading or no-trading and whether or not a change of intention has occurred in “enhancement” of asset value situations.

Koo Ming Kwan & Another v CIR [2018] HKCFI 2593. This case, now under appeal, has been described by the Hong Kong Lawyer (the official journal of the Law Society of Hong Kong) in its online posting of 3 May 2019 as a “prominent success” for the taxpayer. It was held, inter alia, that officers who signed the company’s return were not personally liable under s.82A of the Inland Revenue Ordinance to pay the penalty levied nor precluded by the finality provisions of s.70 from showing that the return was not incorrect.

In the completely different practice area of Chinese customary law, Denis has cross-examined many of the world’s leading experts in that area of law (still of relevance at least to the New Territories). The interaction between customary law and the more familiar notions of the Common Law and of the law of trusts and equity, together with s.15 of the New Territories Ordinance, was explored in the leading case of Re Lau Wai Chau (2000) 3 HKCFAR 98, where the CFA held, inter alia, that an ancestral worship trust can be lawfully dissolved by Deed of Family Arrangement signed by the heads of all the fongs.

For other cases, please see “Selected Cases” below.

Denis Chang is and has been for decades the Chairman of the prestigious Hong Kong Law Journal.  He has spoken and written on the philosophical and ethical basis of law and the foundations of human rights and on the jurisprudence of One Country, Two Systems, including the following:-

“Towards a Jurisprudence of a Third Kind – One Country Two Systems?” Journal of International Law – Case Western Reserve Vol. 2 No. Winter (1988)

“The Reference to the Standing Committee of the National People’s Congress under Article 158 of the Basic Law: Methodology” in the book “Hong Kong’s Constitutional Debate – Conflict over Interpretation” edited by Chan, Fu & Ghai (HKU Press, 2000)

Denis has also delivered various papers at seminars in Hong Kong and abroad, including a public lecture entitled “Rethinking the Foundations of Human Rights” on 12 March 2010 at the University of Hong Kong.

In addition to the authorities mentioned above, the following is a small selection of the reported cases in which Denis acted as Counsel:-

1. Leung Tsang Hung v Incorporated Owners of Kwok Wing House (2007) 10 HKCFAR 480. The leading case – a decision of the CFA – on Tort, Land Law and Building Management, holding that the Incorporated Owners could be liable in public nuisance, along with individual owners, for nuisance hazard encroaching upon or attached to common parts.

2. Unruh v Seeberger (2007) 10 HKCFAR 31. A leading case, decided by the CFA, on estoppel by convention and on maintenance and champerty.

3. Big Island Construction Ltd v Wu Yi Development Ltd (2015) 18 HKCFAR 364. In considering restitution for unjust enrichment, the common law looks for a factor making it unjust to allow the payee to retain the benefit. The CFA unanimously rejected the Canadian “absence of basis for the payment” approach. The majority also overruled the proposition in Seldon v Davidson [1968] 1 WLR 1083 that payment of money prima facie imported an obligation to repay.

4. Polyset Ltd v Panhandat Ltd (2002) 5 HKCFAR 214. A leading CFA decision on what constituted a “notice or order” from the Building Authority for removal of illegal or unauthorised structures (relevant to the issue of rescission in the case) and on the principles applicable to forfeiture of deposit.

5. China Gas Holdings Ltd v Li Xiao Yun & Another (2016) 19 HKCFAR 522 the CFA appeal committee refused leave to the company to appeal on the ground, inter alia, that findings regarding foreign law (here foreign exchange regulations) were findings of fact, not of law and no question of great general or public importance arose.

6. Shun Hing Holdings Co. Ltd & Others v Li Kwok Po David & Others [2017] HKCA 203, part of a continuing saga involving the Estate of Dr William Mong. The Court of Appeal upheld the striking out of the knowing receipt claim.

7. Kong Yunming v Director of Social Welfare [2012] 4 HKC 180.  The Court of Appeal dismissed the Director’s appeal with regard to the applicant in CACV 153/2010, namely Mr Yao, holding that the requirement that Mr Yao, albeit a permanent resident, must be continuously resident for one year to be qualified for CSSA was unconstitutional. NB The Director did not appeal against that finding.