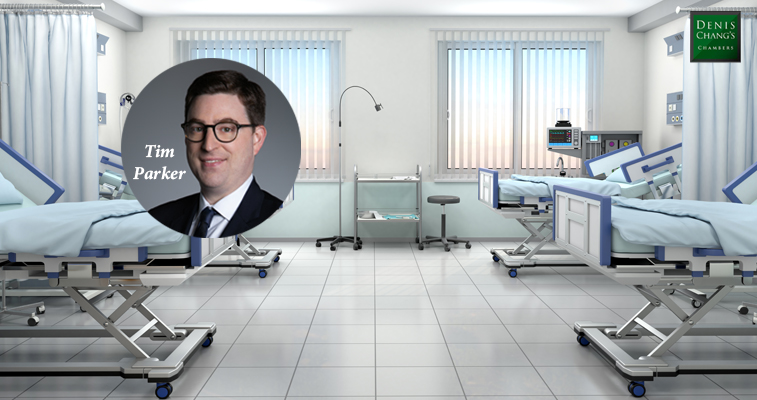 The Chairman of the Preliminary Investigation Committee (“PIC”) of the Medical Council of Hong Kong performs the role of screening out groundless or frivolous complaints against medical practitioners. After the Hospital Authority (“HA”) denied the Chairman’s request for further information related to two complaints, the Chairman and Deputy Chairman of the PIC applied unsuccessfully for a mandatory injunction to compel the HA to disclose the requested information.

On appeal, the Court of Appeal held that, given the Chairman’s limited function of conducting a preliminary assessment rather than a full inquiry, there is no reasonable necessity for him to be endowed to compel medical records from the HA when screening complaints.

Tim Parker appeared for the Hospital Authority, led by Abraham Chan SC and with Kim McCoy, in Chairman and Deputy Chairman of the Preliminary Investigation Committee of the Medical Council of Hong Kong v. Hospital Authority in the Court of First Instance ([2018] 2 HKLRD 842) and the Court of Appeal (CACV184 & 185/2018; [2021] HKCA 1793). The Plaintiffs are respectively the Chairman and Deputy Chairman of the Preliminary Investigation Committee (“the PIC”) of the Medical Council of Hong Kong (“the Council”).

Under section 21 of the Medical Registration Ordinance (Cap 161) (“the MRO”), the Council is vested with disciplinary jurisdiction over registered medical practitioners in Hong Kong.

The MRO, together with the Medical Practitioners (Registration and Disciplinary Procedure) Regulation (Cap 161E) (“the Regulation”), sets out a three-stage process for handling complaints against registered medical practitioners. In essence:

• All complaints are first submitted to the Chairman or the Deputy Chairman of the PIC, who assess whether the complaint is groundless or frivolous and ought not proceed further.

• Complaints which are not screened out by the Chairman in the first stage will be referred to the PIC for consideration.

At the first stage, the Chairman is empowered by section 8(1) of the Regulation to require a complainant to set out the specific allegations in writing, provide clarifications, or support the allegations by way of a statutory declaration.

The Chairman received complaints concerning the treatment of two patients in hospitals managed by the Hospital Authority (“the HA”). The complaints were lodged respectively by an anonymous group of healthcare workers and a hospital laboratory employee.

In both cases, the Chairman thought that he did not have sufficient materials to fairly decide whether the complaints were frivolous and groundless. He sought further information from the HA and suggested that the patients’ personal information – if mentioned in the report – could be masked or anonymised for confidentiality considerations.

The HA rejected the Chairman’s requests, citing doctor/patient confidentiality and a lack of power on the Chairman’s part to require access to such information and documents. The Plaintiffs therefore applied to the High Court for a mandatory injunction compelling the HA to produce certain documents related to the treatment of those two patients.

Decision of the Court of First Instance

Au-Yeung J dismissed the applications, holding that the Chairman is not empowered by the statutory scheme to compel the disclosure of the records, and nor does the Court have any common law power to order disclosure to the Chairman.

Notwithstanding the need for the requested documents and the strong public interest in the proper administration of disciplinary proceedings, the Court took the view that compelling the production of documents would be an unlawful interference with the patients’ right to privacy under Article 14 of the Hong Kong Bill of Rights. The Plaintiffs appealed.

Section 40(1) of the Interpretation and General Clauses Ordinance (Cap 1) (“IGCO”) provides that:

Having regard to this provision, the Court of Appeal began its analysis by holding that the standard to be applied is that of reasonable necessity. In other words, the issue is whether it is reasonably necessary for the Chairman to have the power to compel the production of documents sought.

The Chairman contended that his express powers (under section 8 of the Regulation) to seek clarifications and confirmation from the complainant did not preclude him from having the deemed general powers under section 40(1) of the IGCO.

Rejecting this view, Hon Barma JA pointed out that, while the Chairman’s function of filtering out frivolous and groundless complaints is an essential component of the statutory scheme, it is ultimately a limited function:

“… the Chairman’s function is not one which envisages or requires significant investigation. The examples given of complaints which the first-stage screener is responsible for filtering out are all matters which should be capable of summary determination. Further, all that the Chairman is required to decide is the negative question of whether there is no need for the complaint to proceed further. If he is unable to satisfy himself of this based on the material available to him, then what he should do (and is indeed obliged to do) is to refer the complaint to the PIC. The need for further investigation would, it seems to me, be one reason why a complaint should be allowed to proceed further.” (Judgment §28)

The Court further observed that, while it is reasonably necessary for the Chairman to have the power to seek assistance and obtain documents from third parties in order to perform his functions, this fact does not give rise to the power to compel compliance with his requests.

Given the limited scope of the function being performed by the Chairman – essentially a negative screening function to screen out cases which ought not proceed further – his Lordship took the view that there is no reasonable necessity for the Chairman to be endowed with the coercive power that he contends for.

In light of the above conclusion, the Court found it unnecessary to consider whether ordering disclosure in the present case would involve a disproportionate interference with the fundamental rights to privacy of the subject parties.

The Plaintiff’s appeals were dismissed, and costs awarded to the HA on a party and party basis.

This article was published on 6 January 2022.