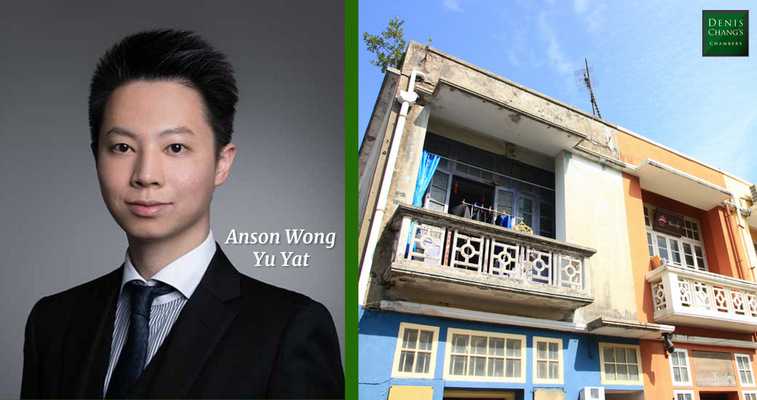 On 14 December 2020, the Appeal Committee (“the Appeal Committee”) of the Court of Final Appeal (“CFA”) granted leave to the Plaintiff (Applicant) in Cheung Lai Mui v Cheung Wai Shing & Ors, FAMV 151/2020 to appeal to the CFA on two questions of law of general or public importance as well as on the “or otherwise” basis. Anson Wong Yu Yat acted as junior counsel for the Plaintiff in this leave application and in the Court of Appeal.

The underlying dispute concerns a property in Sai Kung (“Lot 1101”) which had been jointly owned by three brothers who are now all deceased. The Plaintiff is the personal representative administering the estates of two of them. The 1st and 2nd Defendants are the son and daughter of the third deceased brother and have succeeded to his share of the property

The 3rd Defendant, who is the 1st Defendant’s son, lives on Lot 1101 and has built two structures thereon after the deaths of the three brothers. The Plaintiff brought proceedings against the Defendants for the removal of the structures. The Defendants denied the Plaintiff’s title to sue and contended that the 3rd Defendant alone is beneficially entitled to the property by virtue of the operation of one or more of the doctrines of common intention constructive trust, proprietary estoppel and estoppel by acquiescence. The 1st and 2nd Defendants further lodged a counterclaim against the Plaintiff, seeking an account of rent in respect of a different property jointly owned by three of them.

The Court of First Instance dismissed the Plaintiff’s claim and found in favour of the 1st and 2nd Defendants on their counterclaim for an account of rent. On appeal, the Court of Appeal decided that essential aspects of the claims had not been adequately dealt with at the trial, set aside the judgment of the Court of First Instance, and ordered an extensive remitter to the trial Judge. The Plaintiff applied for leave to appeal to the CFA.

In dealing with the Plaintiff’s application for leave to appeal to the CFA, the Court of Appeal adopted an “unorthodox approach” (as the Appeal Committee put it). The Court of Appeal held that the Plaintiff’s proposed questions of law are prima facie reasonably arguable but decided to adjourn the leave application sine die pending the Judge’s determination of the remitted issues.

In granting leave to appeal, the Appeal Committee accepted the Plaintiff’s argument that it had jurisdiction to entertain the leave application because there was an “absence” or “refusal” of leave from the Court of Appeal. As the Appeal Committee held at paragraph 12 of the Reasons for Determination:

‘… “the concepts of ‘absence’ or ‘refusal’ must be given a broad and flexible interpretation” in this context.  The position, certainly from P’s viewpoint, is that her application for leave to appeal has been refused since the Court of Appeal decided instead to adjourn it sine die.  Looked at broadly and flexibly, that constitutes a refusal sufficient to confer jurisdiction on the Appeal Committee.  Calling the decision to adjourn sine die a “case management decision” does not alter the fact that the application for leave was refused.’

The Appeal Committee further disapproved of the Court of Appeal’s approach to remitter in paragraph 13 of the Reasons for Determination:

‘We do not think, with respect, that the approach adopted by the Court of Appeal in the present case was appropriate.  Questions of law and evaluative questions of mixed law and fact ought not to have been remitted back to the Judge.  The points of legal principle ought to have been determined and, only if necessary and only if it could be done without procedural unfairness, should the Court have remitted any outstanding questions of fact.  Referring legal issues back to the Judge while at the same time directing him to determine them in accordance with the Court of Appeal’s legal analysis was confusing.  It also gave rise to the possibility of a further appeal to the Court of Appeal on a point of law arising from the Judge’s decisions on the remitter.  Moreover if, after having gone through the remitter exercise, the case were to proceed to the Court of Final Appeal where a view differing from the legal analysis of the Court of Appeal was taken, the basis and value of the remitter might be put in doubt.  In these circumstances, our decision is to grant leave to appeal to enable the Court to determine the issues of legal principle and to remit any outstanding factual issues to the Judge only if such course proves necessary and possible without procedural unfairness.’

In the event, the Appeal Committee granted leave to appeal on two questions of law (one on proprietary estoppel and the other on account of rent), as well as on the “or otherwise” basis in respect of the correctness of the decisions of the Courts below regarding the Plaintiff’s claims based on common intention constructive trust and estoppel by acquiescence.

Anson Wong Yu Yat (led by Mr Eugene Fung, SC and with Mr Jason Kung) acted for the Plaintiff in the leave application before the Appeal Committee.