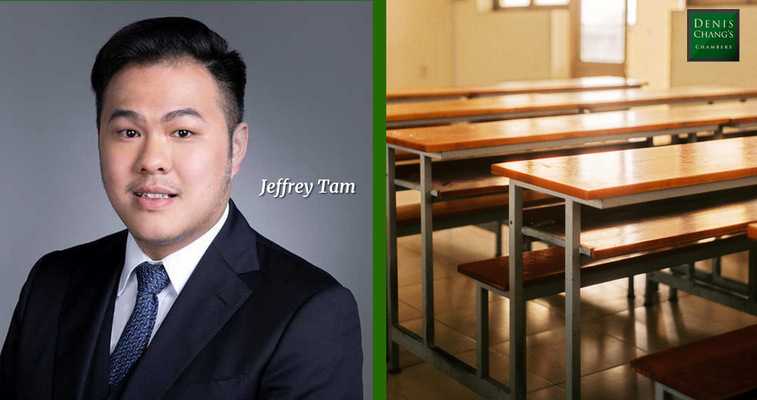 Ms Lam Lai-tong, teacher at TWGHs Leo Tung-Hai Lee Primary School, fell to her death from the school building in March 2019. Following a nine-day inquest, the Coroner ruled that Ms Lam was driven to suicide by the actions of then school principal Ms Law Yuen-yee and that her death could have been avoided. The Coroner adopted the 19 recommendations suggested in the Incident Investigation Report by the Independent Investigation Committee, including suggested measures to protect the identity of school complainants. Jeffrey Tam represented the Hong Kong Professional Teachers’ Union, a properly interested person in the death inquest. The learned Coroner Ms Monica Chow Wai-choo delivered her verdict on 29 January 2021. She found that Ms Lam was driven to suicide by the actions of the then school principal who pressured her to resign. The tragedy was triggered by Ms Lam’s failure to issue formal notice to students’ parents about an upcoming learning trip to Macau; her subsequent meeting with the principal on 5 March 2019 pushed her over the edge and led to her mental breakdown.

The inquest heard that after Ms Lam failed to issue formal notice to students’ parents about the trip, the school principal did not blame the two other teachers involved in organising the trip. Instead, she reprimanded Ms. Lam, telling her that she might lose her job and her provident fund if she made another blunder again.

On 5 March 2019, after Ms Lam compiled a report on her mistake, she was called to the principal’s office for another round of scolding. A teacher witness recalled that Ms Lam cried hysterically after the meeting, before calmly saying that she and the principal would “perish together”.

On the same day, Ms Lam left school early to file a complaint to Tung Wah Group of Hospitals (TWGH), the school’s sponsoring body. Her complaint was handled by an education services officer who just took over the role shortly before. The officer believed that the incident was “not complicated”, and he was not aware of any problems with the school’s governance nor two anonymous complaint letters in 2015 filed against the then school principal. With a view to soliciting background information, the officer informed the then school principal of Ms Lam’s complaint without maintaining her anonymity.

Ms Lam jumped to her death at the school at about 7am the next day. About five months after her death, the then school principal was terminated from her position.

Hong Kong Professional Teachers’ Union, as the largest trade union of teachers in the territory, had been listed as a properly interested person in this matter and was allowed to make representation in this inquest.

In the verdict, the Coroner ruled that Ms Lam’s life could have been saved had her complaint remained confidential or had either of the two other teachers involved in arranging the trip shouldered responsibility for the mistake. The failure within TWGH’s complaint mechanism and the lack of support and care from Ms Lam’s colleagues were factors which contributed to the tragedy.

• Protection of complainants’ identity: The Coroner recommends that in future, following meetings with a complainant, the relevant TWGH department should:

– clearly inform the complainant that the matter would be handled in confidence;
– refrain from disclosing the complainant’s identity unless it has obtained the complainant’s consent to do so;
– annually submit a stakeholders’ report to the school’s management committee for discussion.

• TWGH staff handover arrangements: The education services officer was not aware of anonymous complaints previously filed against the school principal. The Coroner found that, while this was partly caused by his being new to the job, the unsatisfactory staff handover arrangements also played a part. The Coroner recommends that during handover, new staff members should be informed of any special matters such as anonymous complaints and improvement plans related to the subject of complaint.

• Respect for staff’s personal time: The inquest heard that the then school principal would message her colleagues via WhatsApp even on Sundays. The Coroner recommends that TWGH issue guidelines to its schools’ management on respecting employees’ time off.

This inquest was widely covered in the press, including: