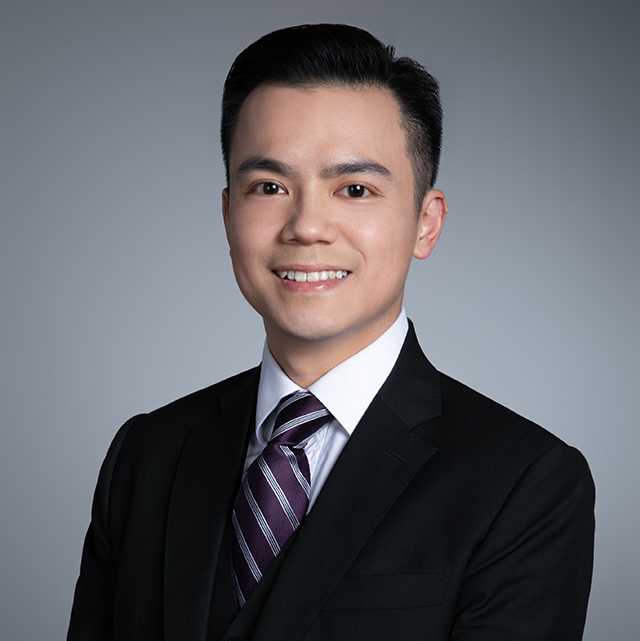 Andrew is developing a broad civil and criminal practice, with experience in areas such as commercial disputes, company/insolvency, construction, equity/trusts, land, probate, personal injuries and public law. He has appeared in civil and criminal appeals, as well as in trials.

Court work aside, Andrew teaches administrative law at the Chinese University of Hong Kong, and media law at the Hong Kong Baptist University.

Prior to joining the Bar, Andrew worked as a bilingual reporter for TVB News. He also anchored the flagship newscasts News at Six-Thirty (六點半新聞) and Late News (晚間新聞).

Four-day trial arising from the sale of a retail jewelry business involving fraudulent misrepresentations and breaches of contract (with Mr. Jeffrey Tam)

Ongoing involvement in a claim for unjust enrichment (with Mr. Jeffrey Tam)

Ongoing involvement in a claim for unjust enrichment (with Mr. Jeffrey Tam)

Seven-day trial arising from a contractual dispute to carry out building repair and maintenance works (with Mr. Tim Kwok and Mr. Albert Wan)

Application to rule D’s expert reports as inadmissible evidence due to D’s failure to comply with the expert evidence procedural regime under O.38 of the Rules of the High Court (Cap. 4A) (with Mr. Tim Kwok and Mr. Albert Wan)

Represented the Applicant in the Government’s appeal against the CFI’s ruling that the permission scheme limiting public assemblies/demonstrations at the East Wing Forecourt of the Central Government Offices was unconstitutional (led by Ms. Gladys Li SC and with Mr. Jeffrey Tam)

Judicial review challenging the Department of Justice’s decisions not to prosecute (with Mr. Jeffrey Tam)

Resisting the putative respondents’ application to sever a rolled-up hearing as directed by the Court (with Mr. Jeffrey Tam)

Ongoing involvement in an election petition arising from the returning officer’s determination that the petitioner was not validly nominated in the Legislative Council By-election for the Kowloon West Geographical Constituency held on 25 November 2018 (led by Mr. Paul Shieh SC and with Mr. Jeffrey Tam)

Application for leave to appeal against the decision of the Small Claims Tribunal on the point of law that the police had no right to use handcuffs on the claimant without lawfully arresting him in the first place (with Mr. Jeffrey Tam)

Appeal against the decisions of the Director of Legal Aid in refusing the applicants’ legal aid applications for failure to disclose reasonable grounds for taking the proceedings (with Mr. Jeffrey Tam)

Appeal against the decision of the Commissioner of Registration in refusing the appellant’s application for the issuance of a Hong Kong Permanent Identity Card for, inter alia, failure to satisfy the 7-year ordinary residence requirement (sole advocate)

D1’s appeal against conviction of an offence under section 20(b) of the Legislative Council (Powers and Privileges) Ordinance (Cap. 382) for contravention of an administrative instruction issued under section 8(3) of the same ordinance (with Mr. Jeffrey Tam)

Represented the defendant at trial for a charge of possession of offensive weapon in public place contrary to section 33 of the Public Order Ordinance (Cap. 245) (sole advocate)

Represented the defendant in a common assault trial (sole advocate)